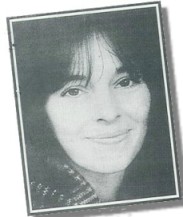 Lesley Duncan born August 12, 1943 was a British singer / songwriter. She was mainly a singles artist with recordings dating back to 1963. After a string of unsuccessful singles from "I Want A Steady" in 1963 recorded as "Lesley Duncan and The Jokers" to "Sing Children Sing" in 1969 Lesley Duncan finally got noticed when Elton John recorded her song "Love Song" on his "Tumbleweed Connection" album. Up until this time she was more successful in the session field. Doing backing vocal for a number of British artists including Elton John, Dave Clark 5, Pink Floyd and too many to mention here. She can be heard in the chorus on the "Jesus Christ Superstar" album.

After Elton John recorded "Love Song" this landed Lesley Duncan a recording contract with CBS / Columbia Records. Producer Jimmy Horowitz gathered some of the top studio musicians in England to record on Lesley's albums including Chris Spedding and Peter Frampton. Her first album "Sing Children Sing" included Elton John on Piano.  "Sing Children Sing", "Love Song" and "Help Me Jesus" would all be released as singles in the US. Top tracks from this album were "Mr. Rubin", "Love Song" and "Lullaby". These songs would all be covered by other artist like Olivia Newton-John and Long John Baldry. In 1972 her second album "Earth Mother" was released. Unlike the first this was not available in the US. Top tracks from this album include "Time", "Fortieth Floor" and the title track "Earth Mother". Due to the unsuccessful singles from the first album in the US, Columbia decided to issue "Earth Mother" as an import only. She also sang on Joyce Everson's album Crazy Lady" which was recorded in 1971 and released by Warner in 1972. It wasn't until 1974 that the single To Be A Pilgrim was issued from the album in England. This ended her time with Columbia and her next album was issued by the GM label in England.

Her next album was "Everything Changes". Highlighting the album are the tracks "My Soul" , "The Serf", "Love Melts Away" and the title track "Everything Changes". This lead to her signing with MCA records in the US in 1976. MCA released her next two albums "Moonbathing" (Lesley's favorite album), which again included the help of Elton John, and in 1977 "Maybe It's Lost". Lesley Duncan also did a short tour in the US in 1976. After low sales of these albums Lesley Duncan was back to a singles artist releasing singles in England with Producer Tony Cox up until 1986. The last albums Lesley Duncan appeared on were the 1979 release by Alan Parsons Project called "Eve" where she sang the track "If I Could Change Your Mind" and the 1980 release "Exiled" by The Mitchell / Coe Mysteries where she sang the track "Hold On To Love".

In 2000 her albums started to be released on CD in England. "Sing Children Sing" was release in 2000 followed by "Earth Mother" in 2001. Everyone is asking when the rest of her albums will be released on CD. We have learned that the original master for those albums were lost in a fire. But, copies of the master have been found and hopefully they will see CD releases.

Lesley resided in the U.K. with her husband and her new found love "Jessica Niblick", a half border collie, quarter
bearded collie, quarter sheltie, totally drop-dead gorgeous puppy. Click on Jessie's name to see the page we created just for Jessie.

Sadly, on March 12, 2010 after a long illness, Lesley passed away. She was 66 years old. She will be sadly missed but her music will live on. Her music touched people all over the world.
Never lose love, and Love will never lose you.....