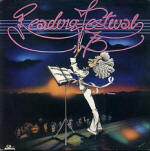 It was a long and frustrating wait, but Magpie Direct finally delivered my copy of the “Reading Festival ’73” CD today – with Lesley Duncan doing a live version of “Earth Mother”. It’s not often I buy a CD for just one track. The others are by Rory Gallagher, Strider, Greenslade, Status Quo, The Faces, Andy Bown and Tim Hardin – not a bad representation of rock music in the early-70s. Most of the artists were connected to London’s famous Marquee Club or managed by Billy Gaff of GM Records, which LD moved to after her first two CDs on CBS.

The sleeve notes discuss the other performers on the album, then say: “Of less obvious note in 1992 is Lesley Duncan, whose wonderful voice and songwriting talents have never received their just desserts. Lesley wrote a song which was included on an early Elton John album, not something which many songwriters can claim, and another connection she could claim with regard to Reading ’73 was the fact that her husband, Jimmy Horowitz, co-produced this album.”

On the CD her intro to the song is: “The next song is a song I wrote with my husband Jimmy, and it was dedicated to Friends of the Earth, which is a very good organization, fighting very hard – and it’s called ‘Earth Mother’.”

The live version is broadly similar to the studio version, with presumably (there aren’t any credits) Horowitz on keyboards and Chris Spedding on guitar, but I suspect a different drummer; the drumming is tighter and more aggressive than on the original. Some day I’d like to hear a sparser version, with piano instead of electronic keyboards, and a stroppier guitar – but Horowitz seems to have liked lush instrumentation, even live. It’s a more powerful rendering; LD’s vocals are much more assertive throughout, particularly in the choruses – so much so that she’s a tiny bit off-key with some of the line ends “stop.. rot… got… track… black… back” (it’s actually really difficult to sing a staccato word perfectly in tune) – but her singing rings with

authority. (Remember, live performances terrified her; read her comments in the CD notes of SCS!) She puts in a nice tremolo-waver on a few words, which isn’t in the original, and which sounds good. The contrast between sheer raw power and sad tenderness in the alternating final choruses is superb. The most startling difference – which works brilliantly – is at the very end of the song. Instead of the fade, thunder, bells and segue into “By and bye” she sings “And we can’t turn and say Stop” – and stops dead. Stunning.

Someone, somewhere (no doubt LD herself, and GM Records, or whoever owns their recordings now) must have the rest of her set at Reading on tape. It would be great to hear it…

(Special thanks to David V. Barrett for taking the time to write this review. If anyone has a review they would like to have posted, leave a message on the guestbook.)